“STAND! For Families Free of Violence is a catalyst for breaking the multi-generational cycle of violence, promoting safe and strong relationships, and rebuilding lives.”

STAND! For Families Free of Violence is committed to promoting safe and strong families. Our approach to eliminating family violence is well-rounded and community-wide. In addition to providing a complete spectrum of prevention, intervention, and treatment programs, we also enlist the efforts of local residents, partners, and institutions, all of whom are striving with us to stop domestic violence and child abuse.

STAND! is a founding member of the Alliance to End Abuse initiative, a cross-sector organization working to help solve domestic violence, sexual assault, and child abuse. However, we cannot achieve our mission without the help of every individual, every school, every faith community, every neighborhood, and every business.

Drawing from the best practices in the field, we address critical community needs by focusing on results and accountability. (Read STAND’s best practices.) Through planning and adherence to sound fiscal management principles, we do our best to prevent funding fluctuations from affecting the programs and services we provide to our fragile families. As a key component of our community’s safety net, STAND! is committed to creating and implementing an action plan for strengthening the safety net in Contra Costa County. (The safety net is defined as food, shelter, access to healthcare, and child and family safety.) We strive to exemplify trust and transparency – both internally and within our communities. 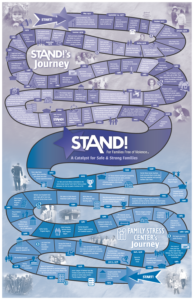 While individual agencies—including STAND! and the Family Stress Center—had been working to end family violence in Contra Costa County since the 1970s, their efforts were fragmented. In fact, agencies focused on partner violence or child maltreatment often found themselves in conflict. In the late 1990s, it became clear that a more coordinated effort between agencies would be more effective.

In February 2000, Contra Costa County became a leader in the fight against domestic violence and child abuse when the Contra Costa County Board of Supervisors adopted a policy of “Zero Tolerance for Domestic Violence.” The Board directed the County Administrator to convene a meeting of government and community leaders responsible for domestic and family violence—as well as elder abuse prevention, intervention, prosecution and remediation. The group emerged from the meeting with a strategic vision for the County’s family violence response systems, along with recommendations for implementation.

This collaborative initiative focused on early intervention, and inspired a long-term commitment to systemic change. By coordinating their efforts, the agencies involved were able to provide increased safety for victims and their children, better access to services for families in crisis, more stringent accountability for offenders, and an improved ability to reduce family violence.

In 2001, State Senator Tom Torlakson authored a bill authorizing a Zero Tolerance for Domestic Violence pilot program in Contra Costa County.  The bill provided an ongoing source of funding for government oversight of family violence services, and demonstrated California’s commitment to effective prevention. Since then, the Contra Costa County Zero Tolerance Initiative and its partners, including STAND!, have been instrumental in increasing both families served and family violence convictions—as well as in reducing the rate of recidivism.

The leadership and vision that created Zero Tolerance has been:

Acknowledged by the National Association of Counties (2002 Achievement Award winner)
Featured in the California Attorney General’s publication “Safe from the Start, Promising Strategies and Programs Resource Guide”
Invited to present at American Public Health Association Annual Meeting in 2005
Inspired by the success of the Contra Costa County program, neighboring counties have adopted similar initiatives. In spite of numerous challenges—funding cuts, a slow economy, underrepresented communities with their need for increased training and outreach—Contra Costa County remains committed to reducing family violence and providing crucial services to families in need.